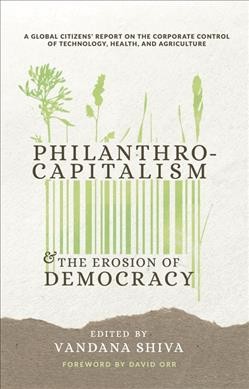 Philanthrocapitalism and the Erosion of Democracy: A Global Citizens’ Report on the Corporate Control of Technology, Health, and Agriculture”—edited by Vandana Shiva

I was privileged to hear Vandana Shiva speak at Yes! Magazine’s launch of this book, where she talked about many of the things included in the introduction titled “Philanthrocapitalism and Colonization in the Digital Age.”

This is a collection of 27 essays from dedicated researchers, activists, journalists, and food systems professionals. “This global citizens’ report unravels an obscure web of power, analyzing the dangers of technocratic solutionism and the billionaire philanthropic ‘developments’ pushing the future of our planet towards extinction and ecological collapse.”

“We are one Earth family, deriving our common humanity and identity from the land as Earthlings, sharing our common sustenance for life, breath, food, and water through community and mutuality . . . The Earth is mother, and we are children of the Earth.”

Shiva decries the colonization, fossil fuel industrialism, and globalization that have separated humans from “the land to which they belong.” She lauds the community control of land use that was more common prior to colonialism.

“The tech barons are the new landlords and feudal lords of the digital age,” she writes, with Bill Gates emerging as “the biggest landlord of America.” Shiva is highly critical of Gates’ Ag One plan, with its very large farms using drones and robots, intensive chemicals, and genetically modified organisms (GMO’s).

The work of Navdanya stands in stark contrast to the Gates approach. Navdanya focuses on “food sovereign farmers practicing regenerative organic agriculture, fair trade, and local circular economies” where they can grow more food and conserve more water without the use of chemicals.

Shiva is highly critical of “The Great Reset,” launched at the World Economic Forum by billionaires like Bill Gates.

This “Great Reset,” writes Shiva, “is not suggesting that we live like Indigenous cultures as one Earth Family, free of inequality, injustice, and hierarchies.” Their agenda is “for the ultimate enclosure of all commons, privatization of the last resource and all the life-giving processes of the planet.”

“Creation of local living economies rooted in the land is now an ecological, ethical, justice, and survival imperative. Returning to the land is the road to resisting getting caught in the web of power constructed by Gates and other philanthrocapitalists.”