Culver City Democratic ClubThe Oldest Club on the Westside.
Home Op-Eds Vladimir Putin is calling the shots on the foreign policy of the... 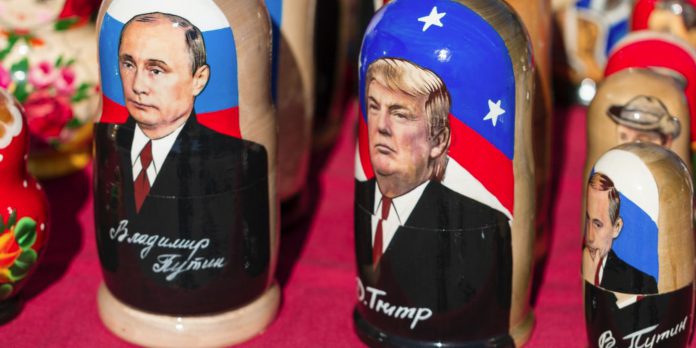 The problem-solving principle known as “Occam’s razor” can be stated as “The simplest solution is most likely the right one.” I think the simplest explanation of why Donald Trump withdrew the American troops from Syria is that Vladimir Putin wanted him to.

I’ve suspected for a long time that Putin has something he is holding over Trump and blackmailing him. My guess is that Putin has lots of documentation of crimes committed by Trump that could get him convicted in an impeachment trial in the Senate and then convicted in court of enough felonies to land him in jail for the rest of his life.

I can also imagine Putin threatening physical harm to both Trump personally and to Trump’s family.

I admit it sounds at first like a crazy conspiracy theory. However, my theory makes more sense to me than the idea that Trump chose to turn Turkey’s military loose on our Kurdish allies in Syria because either a) he’s keeping a promise he made while running for President that he would bring troops home from overseas, or b) that Trump has a clever strategy to distract voters and lawmakers from the current impeachment inquiry.

Theory (a) falls apart once you realize that no troops are coming home, they are just being relocated to another dangerous part of the middle east.

Theory (b) is laughable. Not even Trump is dumb enough to pick a “distraction” that’s guaranteed to infuriate Republican senators at a time when he needs to keep them on his side in the extremely likely event of an impeachment trial in the Senate.

So…what do we do with this information? My recommendation is two things: Support Trump’s impeachment in the House and removal from office by the Senate; and nominate the strongest Democratic candidate to beat whoever is the Republican candidate in the Presidential election of November 2020.

Who is the strongest candidate?

That’s the question of the hour. I’m convinced that the number one issue on the mind of every Democrat when looking at prospective candidates is: “Will this person win?”

The Club will be voting on endorsements at our November 13 general meeting. Members made the decision at our October meeting to use a system of ranked choice voting on the first ballot for our endorsement votes.

My own choices for president are 1) Bernie Sanders, 2) Elizabeth Warren, and 3) Andrew Yang. My first two choices are based on my idea of who is the most electable.

I think Sanders and Warren are the most electable because they have the most credibility with voters and they generate the most excitement among their supporters. They’re also the best fund raisers, and they’ve raised the most without taking money from wealthy donors.

I think Bernie Sanders has the most credibility with voters because he has been advocating for the same things for forty years. Even if you disagree with all of Bernie’s policy solutions, you probably believe that he believes in them. He appears to be telling the truth as he understands it, even labeling himself a socialist. While some think the label will hurt him in the general election, voters understand that he is being honest about what he believes. The contrast to Donald Trump, who believes in nothing except getting what he wants and tells lies every time he opens his mouth, is like the difference between night and day.

Elizabeth Warren is the second most electable because she, like Bernie, clearly believes in what she’s advocating. So far she has a powerful and successful campaign operation. I also believe that the fact that she’s a woman will actually help this time around because it draws attention to her contrast with a misogynist like Trump.

My third choice vote for Andrew Yang has nothing to do with electability, although I wouldn’t bet against Yang in an election against Trump. The main thing I like about Yang is that he’s the only candidate talking about the future and past problems resulting from automation.

Yang has argued that the last good blue-collar job, driving, is going to be automated out of existence (think of truck drivers, cab drivers, delivery drivers, etc.). He has proposed a guaranteed basic income of one thousand dollars a month, as something the government can do to address the problems and human displacement caused by automation.

I have been automated out of two different jobs that I liked: photo technician and typographer. I worked for advertising photo labs in New York and San Francisco until the work disappeared almost overnight with the invention of more powerful computers and an application called Adobe Photoshop.

After that I got a good union job as a newspaper typographer, just as that entire trade was being displaced by computers. At the San Francisco Chronicle we went from about four hundred typographers to none at all.

It’s true that a lot of the manufacturing jobs lost to American workers over the last fifty years have moved to plants overseas (including in China). But if you tour a modern auto plant anywhere in the world you’ll see a lot of robots and relatively few workers, compared to the 1940s, 50s and 60s.