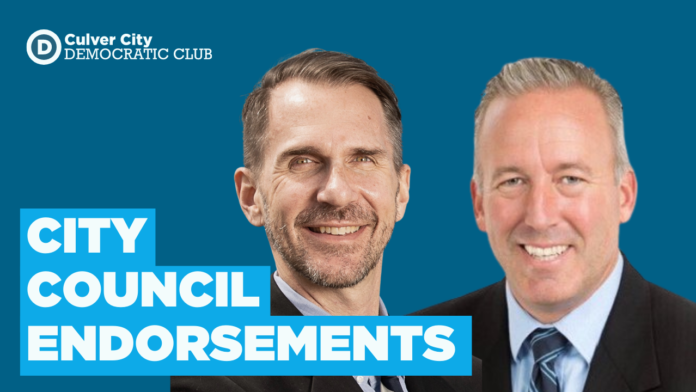 In a vote following their July 13 meeting, the Culver City Democratic Club endorsed Alex Fisch and Freddy Puza for Culver City Council. Two seats are open this November: Fisch is seeking re-election; Councilmember and current Mayor Daniel Lee has chosen not to run again and has endorsed Puza as his replacement.

All Democrats running participated in a forum on June 29, which can be viewed on the Club’s YouTube page (https://www.youtube.com/c/CulverCityDemocraticClub/) and completed detailed questionnaires, which are posted on the Club website (www.c-c-d-c.com).

The community was very engaged in this process and the outcome was decisive; 78% of Club members participated in the endorsement vote, and Fisch and Puza each were chosen by over 75% of those members.

Alex Fisch was elected to the City Council in 2018 with the Club’s endorsement and has been nationally recognized as a leader on housing and transit. The real estate transfer tax he created, passed by voters as Measure RE in 2020, has kept the City financially stable during the COVID pandemic.

Freddy Puza, a former Vice President of the Club, ran for City Council in 2020 with the Club’s endorsement and lost by 28 votes, slightly over one-tenth of 1%. He is co-creator of Culver City’s Pride celebration and has served on the City’s Committee on Housing and Homelessness and the General Plan Advisory Committee.

Why I’m Voting for…

Fellow Democrats, This is the last message of the year, of my second term, and of the midterm election season. I was hoping to repeat the analysis of the primary election results I published in August for the general election, to compare how our endorsed candidates performed in Culver City compared to other areas, but the final results are not yet available.... ... See MoreSee Less

Fellow Democrats, This is the last message of the year, of my second term, and of the midterm election season. I was hoping to repeat the analysis of the primary election results I published in August...
View on Facebook
· Share