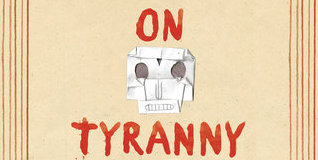 Historian Timothy Snyder, in full on freakout mode after the 2016 election of Donald J. Trump, penned On Tyranny: Twenty Lessons from the Twentieth Century. “History does not repeat,” he wrote, “but it does instruct.” And in that, Snyder sees a kind of hope for 21st Century America. “Americans today are no wiser than the Europeans who saw democracy yield to fascism, Nazism, or communism in the twentieth century. Our one advantage is that we might learn from their experience.”
We might learn twenty lessons.
Now, just in time for the holidays, there is a new, updated graphic novel version of the book richly illustrating the lessons. The illustrations are grim. The words are arranged on the page like a speed bump on a roadway.
They are meant to be read slowly and remembered.
On this, my second reading of Lessons, I am particularly struck by “Lesson 3: Beware the One-Party State.” In this pre-election year when we see Republican control of most state legislatures, control of the U.S. Senate through the filibuster, and a youthful Supreme Court majority that gutted the Voting Rights Act, the Republicans could be on the verge of permanent minority control. That’s why it is critically important that the Senate enact both the Freedom to Vote Act and the John Lewis Voting Rights Act. If enacted, those bills would undo gerrymandering, protect voter access, and restore the Voting Rights Act.