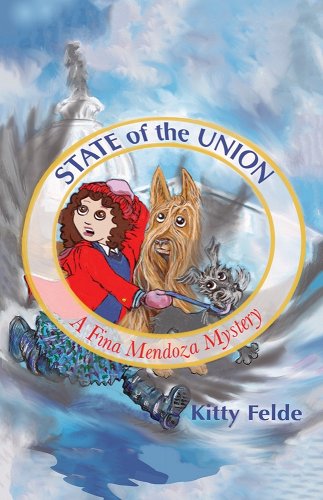 Greetings my fellow Culver City Democratic warriors!
Looking for a way to get your kids excited about the democratic process? In this toxic political environment, there’s a real danger that the next generation will be so disgusted by the partisan battles that they’ll turn off completely.
My wonderful wife Kitty Felde (who spent 25 years as a public radio journalist and talk show host, was named three times by her peers as the Los Angeles Radio Journalist of the Year, and most recently= was Washington bureau chief for KPCC Southern California Public Radio) has turned from journalism to civics education. She’s created a mystery book series and a podcast designed to excite the next generation about public service.
It’s called The Fina Mendoza Mysteries, and it’s about the 10-year-old daughter of a congressman from Los Angeles who solves mysteries on Capitol Hill. Book one, Welcome to Washington Fina Mendoza, is about the Demon Cat who lives in the Capitol Crypt—and dispenses curses to one and all. In book two, State of the Union, Fina is tracking down the mysterious bird who pooped on the head of the President during the State of the Union Address.
The free podcast is called The Fina Mendoza Mysteries. It’s available everywhere you get your podcasts, covers everything from lowering the voting age to an examination of the January 6th insurrection— as seen through the eyes of Fina and her fourth-grade classmates. There are also curriculum and teachers’ guides for all the books and episodes.
Both books have gotten terrific Kirkus Reviews, and have been endorsed by members of Congress on BOTH sides of the aisle. That includes Democrats like Congresswoman Linda Sanchez and former US Senator Barbara Boxer, and Republicans like Congressman David Valadao and former Chair of the House Armed Services Committee Buck McKeon. And Kitty JUST heard from US Supreme Court Justice Sonia Sotomayor, who said the books allow kids to “not only learn about civic education in an engaging manner but also find enjoyment in the learning process.”
Please give a listen to the podcast, and please consider ordering (or urging your public library to order) a copy of the books. Kitty will even mail you a signed bookplate! Kitty also does free class visits (mostly virtual these days), which include lots of tales from inside the Capitol … and end with the students writing and dispatching a postcard to their own member of Congress!
You can find out more at www.kittyfelde.com and you can reach out to my wonderful wife at kitty@kittyfelde.com.
Think of it as investing in the future of democracy.