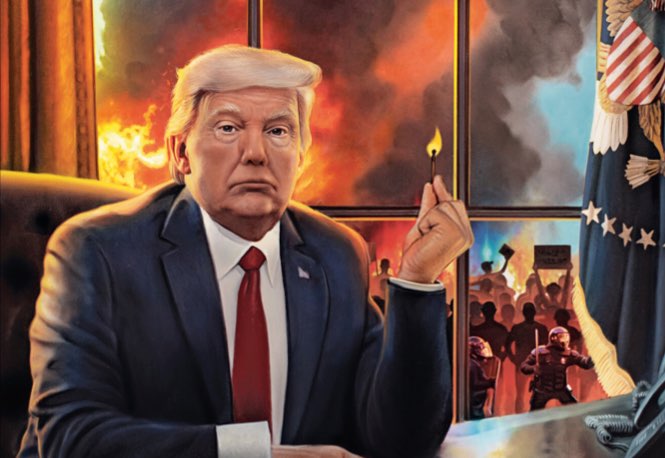 This picture is from the cover of the June 6, 2020, issue of the German magazine Der Spiegel. The cover headline, “Der Feuerteufel,” translates literally as “the fire devil” but is used to mean firestarter or firebug, while the subhead, “Ein Präsident setzt sein Land in Brand,” translates to “A president sets fire to his country.”

The Presidency of Donald Trump has been unique in my lifetime. I believe it’s unique in American history. It appears he intends to turn the United States into a fascist dictatorship, and he’s backed up by the Republican Party.

I turned twenty-one in 1967. I dropped out of college and moved from San Francisco to New York because my girlfriend, who was studying acting at NYU, asked me to come and live with her.

I must have been in love, because the only thing that had kept me from being drafted was a student deferment. Shortly after I dropped out of college, my draft notice came. It was December of 1967.

Before the end of 1968, a lot of things happened: The U.S. military suffered a setback in Vietnam with the Tet offensive; LBJ announced he wouldn’t run for a second term as President; Martin Luther King was shot; Bobby Kennedy won the California primary and was also shot; the Democratic Party had its convention in Chicago and Mayor Daley’s police clubbed anti-war demonstrators on TV; and my son was born at 4 a.m. on November 5 — election day.

I was in the delivery room when Sam first came into the world and the doctor said: “It’s a boy. You’ll have to name him Hubert or Dick.” He said it that way because nobody had voted yet. We didn’t know whether the next President would be Hubert Humphrey or Richard Nixon.

Since 18-year-olds couldn’t vote back then, I’d never voted before. And I didn’t vote that day. I was so angry at the Democratic Party because of the Vietnam War that I couldn’t bring myself to vote for the Democrat, even though I had a pretty good idea that Humphrey would be better than Nixon.

Richard Nixon got elected President of the United States.

Instead of keeping his promise to end the Vietnam War, Nixon kept us there for five more years, and was responsible for about one third of the the American deaths in that war. He stepped up bombing of North Vietnam and mined the harbors of that country’s capital city. He bombed and invaded Cambodia. This helped bring to power a dictatorship in that country that killed thousands of Cambodians.

In the U.S., Nixon’s National Guard troops killed four students during anti-war protests at Kent State University in Ohio. His re-election campaign wiretapped the Democratic Party headquarters at the Watergate office building. The resulting scandal eventually led to his resignation as President.

Since then I’ve always voted for the Democrat.

The situation our country faces in the 2020 Presidential election is worse than the situation in 1968. We’re facing the worst worldwide pandemic since 1918, and at the same time we may be on the verge of an economic downturn as bad or worse than the Great Depression, which began in 1929 and lasted until the late 1930s.

I voted for Bernie Sanders in the primary in 2016 and Hillary Clinton in the general election. My main reason for that was I believed Bernie would have been a stronger candidate. I still believe he would have beaten Trump. I voted for Bernie again in the 2020 primary, and I’m going to vote for Joe Biden if he is the Democratic nominee. I hope Joe wins. I believe he will almost certainly win the popular vote, but we all know that’s not enough to win the Presidency. It wasn’t enough for Al Gore in 2000 and it wasn’t enough for Hillary.

Trump is going to cheat, by suppressing the right to vote and by any other means he can. We have to stop him.