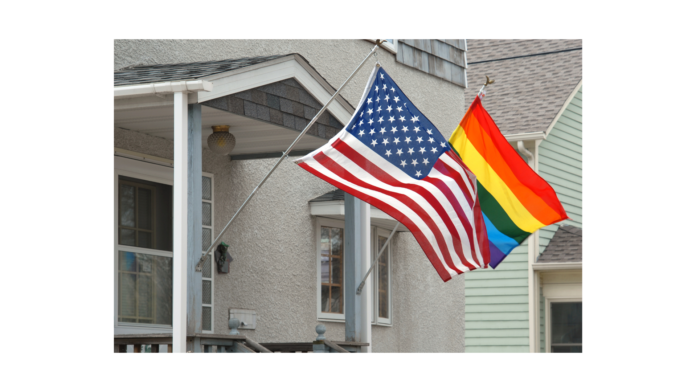 June 14 is Flag Day. I re-negotiated my relationship with the American Flag on June 8, 1977. It was a particularly dark night for the brothers and sisters of the LGBTQ community. (The “lavender menace”, as we styled ourselves back in the day.) It was just about three weeks before the Christopher Street West parade that year and about one week before Flag Day.
Before that date, it had seemed that our community was just beginning to make a bit of progress in our struggle to be out and free. Wonder of wonders! Dade County Florida had passed an anti-discrimination ordinance. But this ordinance triggered the very mother of all backlashes starring Anita FREAKIN’ Bryant the “Florida Orange Juice Girl” herself on an anti-gay crusade called “Save our Children” with Christian Americans waving the Stars and Stripes and sporting “Kill a Queer for Christ” bumper stickers. And soon this movement bore “fruit” (pardon the expression) on June 7th, when the anti-discrimination ordinance was repealed by a margin of 69 to 31 percent.
The flag wavers and bumper sticker bearers promised that their movement would go national. This could not go unanswered. The next night, the gays and lesbians marched on Hollywood.

I don’t know if I was more frightened or more angry. Everyone knew back then that the LAPD and the County Sheriffs had it in for us. Especially women knew the vital importance of parking a considerable distance from any gay/lesbian events because it was well known that the LAPD would take down license plate numbers and use the information to hassle us. I was terrified of getting arrested, but the volunteer march monitors said that we would be fine as long as we kept moving, stayed on the sidewalk, obeyed traffic lights, and didn’t block traffic.

I went by myself. But kind women marching under the “Women of Color” banner noticed me alone and invited me to join them. “White is a color too,” they said.
And so the solemn procession wound its way through the streets of Hollywood. As far as I know, the LAPD made no arrests that night. Why should there be arrests? As Holly Near said of us. “We are a gentle, angry people.”
The march ended at a park for a rally where a local VIP, who was an ally of our community, would speak to us. When she appeared, she was wearing (of all things!) a dress with an American flag design. She looked for all the world like Anita herself! A gasp went up through the crowd and murmurs of “What is she trying to prove?” But the lady in the flag said, “No. This flag does NOT belong to Anita Bryant. This is YOUR flag.”
And in that moment, I felt that the most revolutionary act available to me would be to RECLAIM MY FLAG. Yes! My flag. The haters cannot take it from me unless I cede it to them.
That moment is seared in my heart. And today when I go to the Hollywood Bowl, and the LA Phil plays the anthem, I stand up and sing as loud as I can. My flag is still there.
I know this country is imperfect. But I believe it is perfectible. And I see progress. LGBTQ Americans no longer have to spend our lives in a closet on our hands and knees begging to be allowed to live. For now, same sex marriage is the law of the land.

More progress in all areas of social justice work is both possible and necessary. Let us all raise the flag, and make it so.
Our flag.