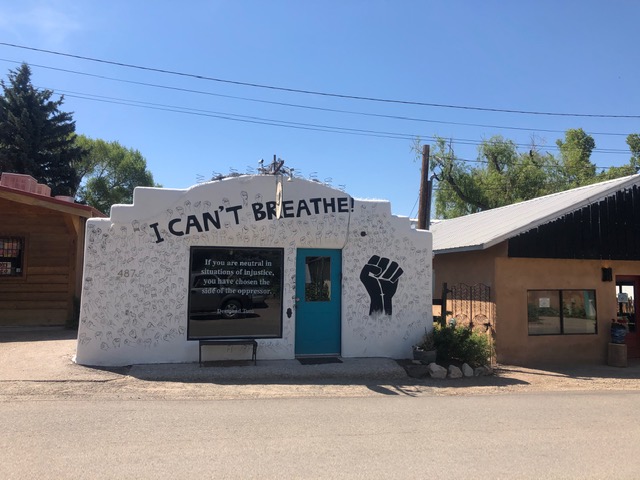 My daughter sent me this I CAN’T BREATHE photo taken in a tiny town outside of Taos, New Mexico. The quote on display is from Desmond Tutu: “If you are neutral in situations of injustice, you have chosen the side of the oppressor.”

Clearly, the public execution of George Floyd on May 25 has forced our society to make a choice, and as a Club we are now making choices about which candidates and ballot measures we will endorse. These are policy choices.

According to the New York Times bestselling author of How to Be an Antiracist Ibram X. Kendi, “There is no such thing as a non-racist or race-neutral policy.”

On the California Educator’s Black Lives Matter Summer Reading List page, Kendi is quoted: “One either allows inequities to persevere, as a racist, or confronts racial inequities, as an antiracist. There is no in-between safe space as ‘not racist.’ The claim of ‘not racist’ neutrality is a mask for racism.”

Monday, July 20, I attended the virtual “How to Be an Antiracist” conversation with Dr. Kendi, Andrew W. Mellon Professor in the Humanities at Boston University, and the founding director of the BU Center for Antiracist Research. Kendi made two important points about the link between Power & Policy: 1) We need a major intervention as relates to power, policy-making power; 2) Everyone needs to support candidates and policies that are challenging inequities.

Kendi also offered a cancer-metaphor warning: “We can’t treat malignant racism if we are in denial.” Much of that denial is linked to our defining racism through the lens of “everyone but me,” he added.

In their denial of this malignancy, certain groups in Culver City are doubling down to resist policy changes that would diminish the power of their “white privilege.” Their overtly racist rants in recent City Council meetings have been quite disturbing. And outside of City Council meetings, I hear subtle “everyone but me” messages from some of our liberal Democrats, including supporters of some who are running for office.

In this moment of choice, Dr. Martin Luther King’s “Letter from a Birmingham Jail” is instructive: “I have almost reached the regrettable conclusion that the Negro’s great stumbling block in the stride toward freedom is not the White Citizens Counciler or the Ku Klux Klaner, but the white moderate who is more devoted to ‘order’ than to justice; who prefers a negative peace which is the absence of tension to a positive peace which is the presence of justice.”

In his 1963 Birmingham Jail letter, MLK agrees with Ibram Kendi about the importance of exposing “malignant racism” and the injustice it creates: “Like a boil that can never be cured as long as it is covered up but must be opened with all its pus-flowing ugliness to the natural medicines of air and light, injustice must likewise be exposed . . . to the light of human conscience before it can be cured.”

In this moment of choice, I am inspired by a student-led organization devoted to exposing injustice “to the light of human conscience.” People of Color for Social Change (#POC4Change) fights for change and new legislation to aid BIPOC (Black, Indigenous and People of Color).

In this moment of choice, we must ask ourselves the following questions:

• What are the “Democratic values” we espouse as a Club?

• What are the values of Democratic candidates we vote to endorse?

• Are we “white moderates” more devoted to “order” than to justice? Or will we stand with candidates and ballot measures that champion equity and racial justice?