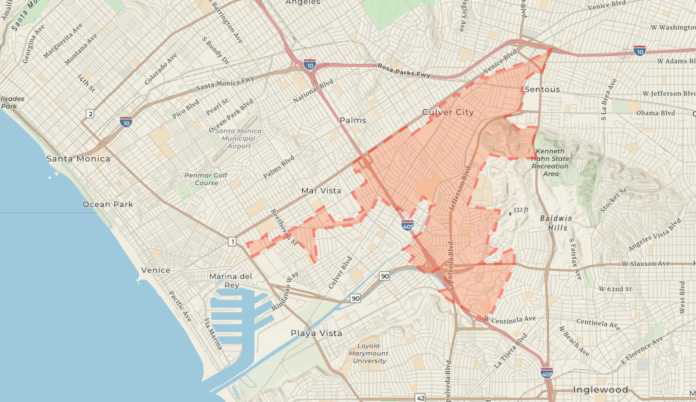 In last month’s message, I attempted to demonstrate that the fictional rural community of Mayberry is an inappropriate and harmful model for Culver City. I encourage you to read that installment before continuing. I also direct you to the adjoining map. Every foot of the border is Los Angeles, except for a segment on the east, which is unincorporated LA County, and that’s mostly the Inglewood Oil Field. If we can recognize the reality of our surroundings, the Chelsea neighborhood of New York is a more useful reference. Caryn Coleman, co-owner of the Sixspace Gallery, may have been the first to call Culver City “the new Chelsea,” on her now defunct blog, art.blogging.la. The Los Angeles Times credited her in a September 2006 article, noting that the phrase also appeared in that month’s Elle. The New York Times, historically reluctant to give LA credit, preferred “a nascent Chelsea” in “A New Art Scene in Los Angeles” from April 2005 then cited that article in a condescending January 2007 sequel: “In Culver City, Calif., Art and Food Turn a Nowhere Into a Somewhere.”

The narrative invoked by calling Culver City “the New Chelsea” is about art and gentrification. Chelsea developed in the early 19th century, focused on luxury housing. However, its location on the Hudson attracted industry, leading to the construction of tenements and other workforce housing. This supply of affordable housing drew artists and other Bohemians as New York grew as a global art and media center during the 20th century. The Chelsea Hotel, built by utopian socialists as NYC’s first co-op, was the icon of Bohemian Chelsea, accepting artwork as rent instead of cash and playing a key role in the lives of Dylan Thomas, Patti Smith, Robert Mapplethorpe, Bob Dylan, Leonard Cohen, Sid Vicious, Andy Warhol, Harry Smith, and many others. In 2011 the building closed, to be renovated into a luxury hotel, with the few dozen long-term residents who could not be evicted suing the new owner, who was attempting to drive them out. Renovations and lawsuits continue.

Chelsea is now one of the most dramatic examples of the “missing middle,” with a bimodal distribution of household income peaking below $20,000 and above $200,000, the low end clustered in the few remaining public housing projects. Converting the defunct High Line railway to a park drove development of luxury housing on the adjacent properties and the further gentrification of the area. While the City offered developers a density bonus if they included at least 20% affordable units, few took advantage of it. The neighborhood activists behind the High Line park have now remorsefully started a nonprofit to help cities combine reactivating public spaces with social justice, to avoid repeating the harm of their project.

Chelsea seems to present the classic scenario of artists coming to a neighborhood for cheap rent, making it fashionable, then being priced out. This is familiar from Venice, Silverlake, DTLA’s Arts District, Austin, and most of the Bay Area. It also seems to be the story of Culver City’s tenure as “the new Chelsea.” A majority of the galleries and restaurants mentioned in those 2005 and 2007 New York Times articles have closed. Some of that is the fashion cycle: food and art are risky and fickle businesses, but this cycle chews up neighborhoods. While part of the fun of art, food, music, and style is finding new scenes and watching them grow, what happens to the people and businesses priced out of Venice and Silverlake? Is the only option for those of us who can stay to passively watch our city become uncool again?

However, the deindustrialization and gentrification of Chelsea was the outcome of nearly a century of urban planning, not merely art world trends. In the late 1950s and early 1960s the Newark-Elizabeth port was upgraded to handle container ships, a major contribution to this standardization of shipping. Newark-Elizabeth replaced the old Port of New York in 1962 which eliminated the advantage of having manufacturing in lower Manhattan and freed up that land for more lucrative uses. Since the 1920s, a revolving door cast of civic and business leaders had worked to undiversify Manhattan by removing working-class jobs and housing, including by moving the port. Jane Jacobs may be best remembered for defeating Robert Moses’ plans to build a freeway across Manhattan, but she failed to stop the broader strategy to convert as much of its property as possible to high-end office space.

When I selected Chelsea as the counterpoint to Mayberry, I intended to talk specifically about cultural sustainability: exploring whether or not the “creative economy” can bring something besides “creative destruction.” I still believe this is a vital question for Culver City, and hope the General Plan Update will address it in depth. However, the more I dug into the history of Chelsea, the clearer I saw that it was a story of massive technological and economic shifts which could not be ameliorated merely by more robust and proactive arts funding. While the preservation of The Kitchen is important, it shrinks next to the displacement of a neighborhood’s entire working class. While Culver City did not have our own Robert Moses, David Rockefeller, or Michael Bloomberg, the collective commitment to Mayberry was its own undiversification program. We prioritized keeping the city at bay.

Early in Part One of this essay I mentioned that references to Mayberry, Norman Rockwell, and “traditional small-town atmosphere” were in the Call for Proposals used to recruit the General Plan Update consultants. I strongly hope that these terms and concepts will not appear in the Plan itself, and that the new General Plan will chart a course to remediate the ways this fantasy has limited our cultural and physical development, isolated us from our neighbors, and squandered our resources.

The dream of isolation and stasis represented by Mayberry and the transformation of Chelsea from an economically diverse neighborhood full of immigrants and artists to one with a median household income more than twice that of NYC as a whole are both cautionary examples for Culver City’s future. This Club’s November program will be on the General Plan process, featuring the City staff coordinating it: Advance Planning Manager Ashley Hefner Hoang and Associate Planner Lauren Marsiglia. This will be focused on the process: what work has been done, what remains, and how we can contribute, but there will also be some opportunity to provide input.