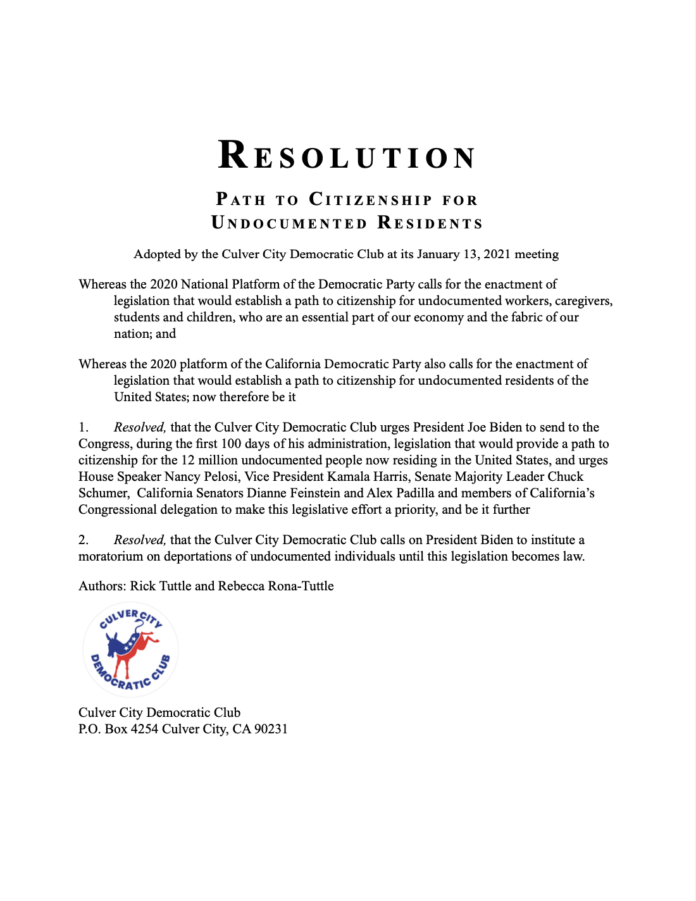 Adopted by the Culver City Democratic Club at its January 13, 2021 meeting

Whereas the 2020 National Platform of the Democratic Party calls for the enactment of legislation that would establish a path to citizenship for undocumented workers, caregivers, students and children, who are an essential part of our economy and the fabric of our nation; and

Whereas the 2020 platform of the California Democratic Party also calls for the enactment of legislation that would establish a path to citizenship for undocumented residents of the United States; now therefore be it

1. Resolved, that the Culver City Democratic Club urges President Joe Biden to send to the Congress, during the first 100 days of his administration, legislation that would provide a path to citizenship for the 12 million undocumented people now residing in the United States, and urges House Speaker Nancy Pelosi, Vice President Kamala Harris, Senate Majority Leader Chuck Schumer,  California Senators Dianne Feinstein and Alex Padilla and members of California’s Congressional delegation to make this legislative effort a priority, and be it further

2. Resolved, that the Culver City Democratic Club calls on President Biden to institute a moratorium on deportations of undocumented individuals until this legislation becomes law.